AVA Belfast has evolved into what is undoubtedly one of the most important festival events in Northern Ireland’s ever-expanding cultural calendar. Across the 3rd + 4th June for the 2022 edition, AVA invites international icons from the live and electronic worlds to the heart of Belfast city to play alongside the grassroots Southern and Northern Irish talent that inspired AVA from day one.

In what promises to be an emotional affair, Belfast’s biggest electronic export BICEP returns to AVA for their largest homecoming show to date. BICEP’s meteoric fame saw the duo rise from party planners and bloggers to 2x BRIT Award nominees with a UK Number 2 album with their last Ninja Tune release, ISLES. BICEP’s productions are the soundtrack to Belfast city, and AVA are ecstatic to welcome them back to home turf.

Also on board is 3x Grammy-nominated producer, Mura Masa aka Alex Crossan, making his AVA debut. Known for his optimistic and charged productions, Mura Masa encompasses the energy of youth; winning him international recognition and Platinum-selling records across UK, USA, and Australia. His list of collaborators is an accolade in itself, working with A$AP Rocky, Charli XCX, Caroline Polachek, Slowthai and more.

Representing for the leftfield fans is Jon Hopkins, esteemed Grammy-nominated composer of left-leaning electronica crafted for the nighttime mind, body and soul. Jon joins June’s event with a DJ set that will be a celestial interpretation of techno and drums with a powerful visual show brought by long-term collaborator Dan Tombs. In his career, Jon is regarded as a remarkable creative mind – producing music for Brian Eno, Coldplay, David Holmes and more.

Born in Cork and raised in Kerry, Biig Piig aka Jess Smyth has rocketed to fame with her smooth take on rap and neo-soul. Already having racked up millions of plays on Spotify, Biig Piig’s slick and sedative sound has seen her recognised as one of Ireland’s most important current live exports.

Experimental electronic sounds come from Bristol’s vibrant punk x techno crossover duo Giant Swan, whilst harder techno explorations come from I Hate Models and a beacon of the genre and recent Mixmag cover star – VTSS.  Dancefloor drama in the form of Baltimore club, breaks and ghetto house comes courtesy of LSDXOXO, with break-through party-starters Logic1000 and Bklava also set to thrill. Of course, there’s plenty more to keep an eye out for – soulful house from Floorplan, plus high BPM, rave NRG from Kessler, Calibre and Hooversound Records boss, Sherelle. Overmono, Soichi Terada on a new album tour, Ross From Friends will all perform live electronic sets in what will be a serious weekender for all electronic music fans.

After the success of 2021’s ‘The Grasses’ stage, AVA will again invite rap, soul, RnB, Punk and crossover live names for 2022 who add different energy. Last year saw moshpits at Kojaque and singalongs with Gemma Dunleavy who will return to the festival – and this year ups the ante with Biig Piig, New Dad, Enola Gay, Mango x Mathman, Monjola all performing live shows.

As always, Irish talent from both the North and South play a vital role in the programme. The motivation behind AVA was to highlight the incredible talent coming out of Ireland, and that will always be at the heart of the festival. Crews and collectives like Twitch, EVE and Plain Sailing, upstarts like Jordan Nocturne, Holly Lester and Cartlon Doom, and of course – long term legends will all be representing the Irish contingent in 2022. 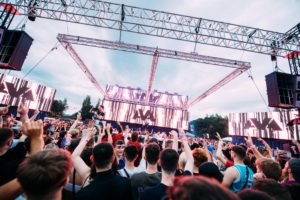