TITANIC Belfast is celebrating its 10th birthday next month and to mark this momentous occasion, the world-leading tourist attraction is inviting people to share their favourite Titanic Memories from over the last decade for the chance to be included in a special show-reel.

Perhaps you popped the question to your partner, enjoyed a special day with family, celebrated a big birthday or bumped into your favourite celebrity – if you have a Titanic Memory then Titanic Belfast wants to hear from you.

The best movie-magic moments will be selected to star in the 10th birthday show-reel, alongside some of Titanic Belfast’s staff’s favourite moments. The short film will be premiered during the birthday celebrations and will also be available online for people to watch around the world.

As part of the celebrations, members of the team who have worked at Titanic Belfast since it first opened have shared their favourite Titanic Memories including Chief Executive, Judith Owens MBE: “I can’t believe that we are celebrating the 10th birthday of Titanic Belfast. There’s been so many stand out moments for me during this time, but my favourite memory is definitely from one the very first opening events in 2012. I was Director of Operations at the time and as the building was closing for the day, I looked down from Level 2 and could see a family taking a photo in front of the Titanic sign. I felt a real moment of achievement and realisation that that was it and I just knew that the image would be forever replicated by thousands of families from all over the world as visitors went through our doors.”

Judith Colhoun, Duty & Events Officer said: “My absolute favourite Titanic Memory was when Liam Neeson came to visit and I gave him a tour of the Titanic Experience galleries. He couldn’t have been nicer and what I loved is that he told me that wherever he is filming in the world, he always tells the cast and crew if you haven’t been to Northern Ireland, go! And specifically go to Belfast. He just loves the city and now that he has been to Titanic Belfast, he said he’ll add that to the list. So that was a definite highlight for me.”

Jonny Kelso, Visitor Experience Crew said: “Over the last 10 years, I’ve really enjoyed meeting the guests from around the world that visit Titanic Belfast and it is my pleasure to be able to share with them the story of Titanic. A particular highlight for me was from 2014 when the Irish rugby squad visited and I got to take the players on a tour of the experience – it was amazing to get the opportunity to meet them and something I’ll always remember.”

If you are one of the over six million people from around the world who have enjoyed a visit to Titanic Belfast since it opened in 2012, joining VIP guests such as Her Majesty The Queen, TITANIC director James Cameron, the discoverer of Titanic, Dr Robert Ballard, as well as celebrities including Adele, Sir Rod Stewart, The Backstreet Boys, Michael Bublé and Laurence Fishburne – then don’t miss the chance to be part of this milestone anniversary.

Judith Owens MBE continued: “Titanic Belfast has helped put Northern Ireland on the world stage over the last decade and this would not have been possible without the millions of visitors that have walked through the doors and enjoyed the unique experience we offer. We would love some of these visitors to get involved in our 10th birthday show-reel, so please get in touch and send us your Titanic Memories and you never know, you could play a starring role in the celebrations!”

You can share your Titanic Memories by emailing your photograph and a short blurb telling the story to digital@titanicbelfast.com or sharing your entry via social media, tagging @TitanicBelfast and using #TBTurns10 by Sunday 20th February.  For more information, visit www.titanicbelfast.com. 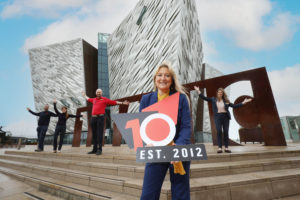