Tourism Ireland has gifted its six ‘Glass of Thrones’ stained-glass windows to Maritime Belfast Trust (formerly Titanic Foundation Limited). The windows are now on permanent display in the Titanic Quarter and are part of Belfast’s Maritime Mile.

The beautifully crafted windows were installed around Belfast back in 2019 – to showcase and celebrate Northern Ireland as ‘Game of Thrones® Territory’ to millions of fans of the TV series around the world. The windows – which each depicted a key House from the show – marked a decade of filming and production in Northern Ireland and the installation was timed to coincide with the broadcast of the final season. The campaign – called ‘Glass of Thrones’ – was created by Tourism Ireland and Tourism NI, in partnership with HBO.

As travel from overseas to Northern Ireland begins to restart, the ‘Glass of Thrones’ installation will be an important new attraction for fans of the hit TV series visiting Belfast and Northern Ireland. Tourism Ireland will take every opportunity to promote the ‘Glass of Thrones’ in Belfast’s Maritime Mile, as well as our Game of Thrones® filming locations, in its promotions around the world.

Shane Clarke, Tourism Ireland’s Director of Corporate Services, Policy & Northern Ireland, said: “We are delighted to announce the handover of our ‘Glass of Thrones’ to Maritime Belfast Trust. It is really wonderful that these beautiful pieces of art are now permanently on display in Belfast, as part of the Maritime Mile – enhancing our ‘Game of Thrones’ offering and creating a new attraction for fans to come and visit. As overseas travel to Northern Ireland begins to restart, Tourism Ireland will continue to highlight Northern Ireland around the world, reminding people that Northern Ireland is ‘Game of Thrones® Territory’. Our aim is to spike their curiosity about the landscapes and locations featured in the series and inspire them to come and explore them for themselves.”

Kerrie Sweeney, CEO of Maritime Belfast Trust, said: “The six Glass of Thrones installations have become key features of the Maritime Mile, celebrating the role Titanic Studios played in the filming of Game of Thrones. We are delighted to work with all our partners, Belfast Harbour, Titanic Quarter Limited, Odyssey Trust and Department for Communities, to feature the landmark artworks on their respective sites, linking our key heritage assets together. Over the last year, we have had over 1,000 local people a day admiring the installations and we look forward to welcoming more visitors and local people to the area over the summer months and beyond.”

Tourism Ireland’s ‘Glass of Thrones’ campaign in 2019 was seen by more than 4 million GoT fans in ten markets – including Great Britain, the United States, Canada, Australia, France, Germany, Spain, Italy, the Netherlands and Scandinavia. It delivered positive coverage for Northern Ireland worth over £30 million. The campaign was also rolled out by Tourism NI in Northern Ireland and the Republic of Ireland.

The ‘Glass of Thrones’ campaign won a Bronze Lion award at the prestigious Cannes Lions International Festival of Creativity in the outdoor category. The Cannes Lions awards are highly coveted and generally regarded as the Oscars of the advertising and marketing world. 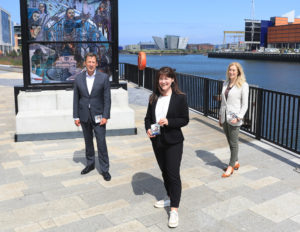