THREE IN A ROW FOR TITANIC HOTEL BELFAST WITH GLOBAL TRAVEL AWARDS HONOUR!

THREE IN A ROW FOR TITANIC HOTEL BELFAST WITH GLOBAL TRAVEL AWARDS HONOUR!

In the toughest of trading years for the hospitality sector, Titanic Hotel Belfast has been awarded the most sought-after title of ‘Northern Ireland’s Leading Hotel’, for the third time in a row, at the World Travel Awards 2020.

Every hotel in the country has these awards in their sights as they recognise the winner’s commitment to excellence on a global scale and are described by World Travel Awards as the ultimate industry accolade.

Adrian McNally, General Manager, Titanic Hotel Belfast, said: “It’s such a unique honour for us to win this international award again. Given the tough year the hospitality industry has faced in 2020 and the agility with which we at Titanic Hotel Belfast have had to adapt the offering for our guests, being named ‘Northern Ireland’s Leading Hotel’ is reassuring, as it proves our guests have continued confidence in us as we navigate these challenging times.

“Awards like this anchor us and motivate us in our commitment to continue to grow in our service delivery and reputation as we serve the Northern Ireland and international visitor with nothing less than first class service.

“I would like to take this opportunity to thank everyone who supports the hospitality industry, everyone who voted for us to win this award for the third time in a row and the employees of Titanic Hotel Belfast who make the hotel come to life every day.”

Titanic Hotel Belfast is located in the former headquarters of Harland & Wolff, builders of Titanic, featuring 119 luxurious bedrooms with Art Deco nautical style. It boasts the world renowned Harland & Wolff Drawing Office which has been restored to its former glory and dates back to the 1880s when it was home to the design of many of the world’s most famous ocean liners, the creation of the ‘floating hotel’ and influenced the design of many of today’s cruise ships. 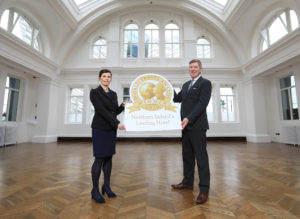